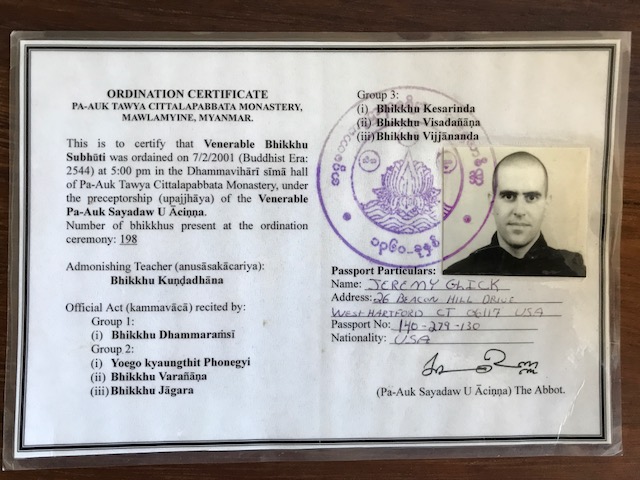 Many people who have learned that I have re-ordained and actually know what that means have asked me why I did it.  It is a long story, but I will try to be brief.

During my first ordination in 2001, at Pa-Auk Main Branch with Venerable Pa-Auk Sayadaw as my preceptor, I was asked 13 questions.  According to tradition, every monk is asked these 13 qualifying questions in the ordination ceremony twice.  It is a requirement for the ordination that a monk gets taught about the 13 questions before he is officially asked these questions.  Because this requirement needs to be verified, the “practice session” has become embedded into the whole ordination procedure.  The first time the set of questions are asked, the sangha or group of monks can witness that the candidate was given a lesson.  The second round of questions (only 3 minutes later) is for real and the sangha can officially hear the answers for each qualifying question.  The official ordination chant called “kamma vaca” follows immediately.   After that, the monk is “ordained” and then taught about the robes, food, lodging and medicine requisites.

During both sets of questioning we are told that it is the moment of truth, and to tell the truth and not to be confused, afraid, or embarrassed.   I have obviously gone over the questions before the official yet superficial practice run.  However, inside the ordination hall and after the first “practice questions” were asked, I had some confusion after I answered “Yes” to the question “Are you free from government service?”  This rule is to prevent active duty (military) deserters from seeking asylum in robes when they would normally go to jail for breaking their contract.  I wondered if being registered for the draft would also count?  I went through it in my mind for what seemed to be several hundred times before the final real questioning would take place 3 minutes later.  Eventually, I decided that I was thinking too much and that it did not make logical sense otherwise.  “How else would anyone be able to ordain?”, I thought.  Using that logic and the fact that other Americans have ordained,  I told myself I would answer “yes” for now and check about it later.

After I was ordained, it was the most important and happiest moment in my life.  I had asked Sayadawgyi if I could ordain on the Full Moon Day.  He had told me it was very busy, but I asked again and he said he would see what he could do.  What I did not know was that it was the Pa-Auk Mahadana (Big Donation) day and all of the important Pa-Auk teachers were visiting during that time, including teachers from abroad.  Sayadawgyi arranged for me to ordain right before the bimonthly Patimokkha recitation.  When I mean right before, I mean, that everyone was seated for the patimokkha ceremony and then they announced an ordination would take place.   After I ordained, Sayadawgyi told me to sit at the very end because I was the youngest bhikkhu in the room.  198 bhikkhus were recorded as attending my ordination which is extremely rare for any monk in the world to experience.  For me, it was probably like a woman who is getting married for the first time.  I was so happy and it was such a wonderful day.

The next day, I checked about the 9th question about being free from government service only referring to deserters. I asked a monk from the “Galduwa” tradition who was visiting from Sri Lanka.  He said that I answered correctly, but since I had some doubt and was confused and afraid to speak up, I had technically lied when I answered “Yes”.  He then explained that my ordination was invalid because a novice monk loses his ordination if he lies.  Since it is normal to ordain a layperson as a novice and then as a full monk, he claimed that the whole ordination was invalid.

Later, I spoke with several senior and official monks, including a Western monk who wrote the English book on ordinations and I was assured there was no serious problem with my ordination.  Eventually I forgot about the ordeal and moved forward with my monk life for the next six years.

In 2007 my religious visa renewal was refused because my original visa was a simple tourist visa, and it was changed (in the back office) without needing to leave the country first.  Before I came, there was no such procedure to “switch a tourist visa into a residential visa without leaving the country and coming back.”  After, some local people with connections in the government did this for me and were willing to do this for others, it became the standard procedure for most foreigners coming into Myanmar to meditate at Pa-Auk.  In 2007, a new  immigration minister was appointed and he carefully looked over the history of all the renewal applicants.  Over 300 applicants were refused.  The refusal letter came with a photocopied notice and a hand written number of how many others were refused by the new minister for the same reason.  In 2007 there was a massive exodus from Pa-Auk and I decided to go to Sri Lanka on a one-way ticket instead of a round trip ticket to Thailand.  Both trips were almost the same price at the time.  Ironically, I was told to arrive to Sri Lanka on a tourist visa and it would later get “switched” to a residential visa with no problems and there were no problems.  A Buddhist government is really great if you are Buddhist.

My root teacher and preceptor, Venerable Pa-Auk Sayadawgyi was staying in Na-Uyana Forest Monastery at the time, and that was the same place I had arranged to go to because most monasteries in the world are not allowable for monks.   Na-Uyana Monastery was allowable because their monks are not allowed to use money just like Pa-auk Monastery.   During my stay, I saw many monks who had given up or were planning on giving up their seniority and re-ordaining in the Na-Uyana / Galduwa tradition.  I didn’t like to see that and I tried to help them avoid such an extreme act.  However, they told me this and that, and all the reasons why their ordinations were invalid and then I was triggered about the six year old doubts of my own ordination.  The doubt came back and the more I researched it, more doubt would arise.  It turned out that i was living in the Grand Central Station for ordination doubts about many of the world’s ordinations.  Some of these doubts might be within reason, but not all.  The monk who originally who spoke his doubt about my own ordination was from that tradition as well.  In 2006, over 200 of their own Galduwa monks were re-ordained because some string that was tied to the ordination hall.  That can invalidate the “water-ordination-hall” and all of the monk ordinations for the past 6 years were nullified.  In 2007, I was very senior at six rains (ie: approximately six years as a monk).  Since most of the monks had become junior again, I was maybe the tenth most senior monk out of 90.

The tipping point was when my monastic friend from Nepal (who also was rejected for his Myanmar visa renewal) eventually came to Na-Uyana.  Na-Uyana officials did not like this or that about his ordination and he started to get doubt and eventually dropped down to a novice monk.  Before, he was sitting next to me on the bench near the front and then a few days later, he was sitting on the floor with the junior monks.  When I asked him “Why?”, he said, “Did I ordain for the better seat?  Did ordain for the better food?”

Those two sentences stuck in my mind and then I decided that I would re-ordain.  Because everyone else had lost their seniority, re-ordaining did not feel like such a big deal.  Venerable Sayadaw was there and I explained to him about my dilemma, and then asked him for permission to re-ordain, which he said “Yes”.   On the night of June 17th,  I dropped down to a novice monk, then I wore a bed-sheet, and then I got my robes back from a new novice preceptor, Venerable Ariyadhamma and ordained as a novice 20 minutes later.  The next morning, on June 18th, I ordained. as a full monk again.  I lost 6 years in the process.

It was very humbling to re-ordain. There were many monks who were really new and I had to bow down to them after my first day. I had dropped to the bottom of the pecking order.  Once you give up, you cannot get those years back. It is official years, but the experience of “years” are still there. That never leaves. In the end, there were some good outcomes by re-ordaining and I try to look on the bright side of it all.

The issue was whether I lied and if I lost my novice ordination.  It was difficult to decide that aspect at the time.  The senior monks had different reasons for why I was still a monk.  Venerable Ariyadhamma said it was not a lie, but if it were, I would have lost my novice monkhood. Another official monk said that I did technically lie, but not to worry, because monks can be ordained without being a novice beforehand.  It was difficult to decide because of this.  A few months later, after it was too late a visiting scholar monk pointed out to me that if I had asked Venerable Ariyadhamma the right question, “Can monks ordain directly without being a novice first?” then he would have confirmed this is actually possible.  Unfortunately, I was focused on the novice part only.  That was how the problem was presented to me and that was what I was focusing on.  Lastly, after more than five years had passed, I realized, that at the moment right before speaking my answer, nearly the split second before speaking… I came to terms with my mind and suppressed my doubts with reason.  I was not confused or embarrassed and was quite composed.  I felt confident at that moment, but also decided I would check the next day just to be sure.  I did not lie and I am the one who is the real judge about that.   One has to know one is lying in order to lie.  He has to know before, during and after.   “I will lie”  “I am lying”  and “I told a lie.”  That did not happen.  It is all a learning process.

In 2012, I returned to Pa-Auk and I requested a strengthening ordination ceremony called “Dalhi-Kamma” for the purpose of “connecting again” with Venerable Pa-Auk Sayadaw and Pa-Auk.  He personally does this only for special cases and read the special Pali phrases (kamma-vaca) that make up an ordination.  Next month I will be celebrating my completion of 13 rains from 2007 and 19 (total) since 2001.  I am very happy that I lasted this long and hope to continue for the rest of my life.

So that is the long story.

One thought on “Why I Ordained Twice”