This article explains the essence of piṇḍapāta (alms) and why we go for alms, even in poor villages. On the weekends, I have some time to go for alms in the nearby village. However, you might ask yourself, “Why would a monk collect food from a very poor village during an economic crisis when the monastery is mostly supported by wealthy people? Isn’t this making it more difficult for the Sri Lankan villagers?”

It is true, it could make things more difficult for them. Giving does put a burden on those who give, especially those who are poor. But does that mean that poor people should not give … ever? Going for alms is a very beautiful practice. The Pāḷi word for alms is piṇḍapāta and means:

When we go for piṇḍapāta, we passively collect small amounts of food (piṇḍa) from people who place it (pāta) in our bowl . In this way, anyone can give and contribute to our meals without much of a significant hardship. Piṇḍapāta is an important practice for Theravāda Buddhist monks for several reasons.

As a bee takes the nectar
and moves on, doing no damage
to the flower’s beauty and fragrance;
and that’s how a sage should walk in the village.

Firstly, it gives the village people an opportunity to make merit. In Buddhism, making merit refers to the accumulation of wholesome kamma through good thoughts, speech and actions. By going piṇḍapāta in a village that is struggling, Theravāda Buddhist monks are able to help the local people make merit by receiving from them. There is a general saying, the poorer the person, the more they need to give. This is because they can make good merit, when merit was lacking in the past and the act of giving is seen as a virtuous act that leads to positive kamma results, especially in the future lives.

“With bowl in hand, he roam
Like a bee that takes the nectar,
without a home,

Leaving flowers unharmed, their beauty and fragrance intact.
So let the sage walk the village, and true to the monks’ pact.

Taking what is offered with humility,
Causing no harm in his passage,
And living in harmony
and spreading the message.”

ChatGPT Adaptation of the Dhammapada verse 49
Modified by me

Going piṇḍapāta in a village that is economically depressed is an opportunity for both the villagers and monks to show compassion and empathy. We are there because of them and they are giving because of us. Buddhism teaches that all beings are equal and deserving of compassion and loving-kindness. By going piṇḍapāta in a village that is struggling, the Theravāda Buddhist monks are able to show compassion and empathy to those who need to make merit. This is another important aspect of Buddhist practice.

Sharing With The Community:

Lastly, by going piṇḍapāta in the village, the food is not wasted. I ate my meal from the generosity of the local villagers. Before eating, I removed the extra food I could not possibly eat myself and put it in a large tray for the other monks. The monks who did not get enough food from their own alms round are able to take from this tray. However in almost all cases, the other monks contribute to the tray as well. Because we eat before the rest of the monastery, the other monks will see our tray of village food at the beginning of the lunch line during the monastery’s lunchtime. They will surely take this food for themselves, knowing the ethical and Buddhist values that went into that tray of food. It is a different color and easily recognized without any need for a written sign saying so. However, we put one there anyway.

It also gives proper contemplations for the monks when they eat their food. The food was given to the monks on faith, so the monks need to fulfill their duties in meditation, study, and work. When we give from our own bowl to the community of monks, it also helps to promote a sense of community and sharing among the monks. This too is an important aspect of Buddhist practice. 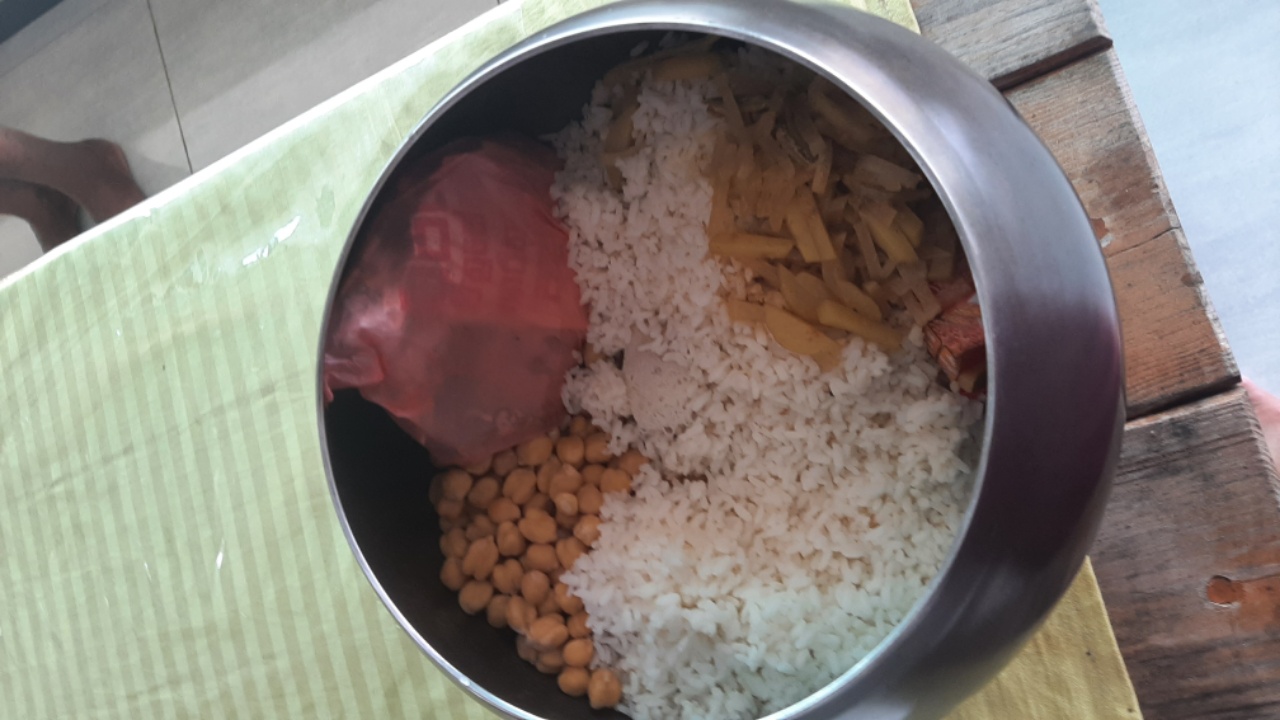 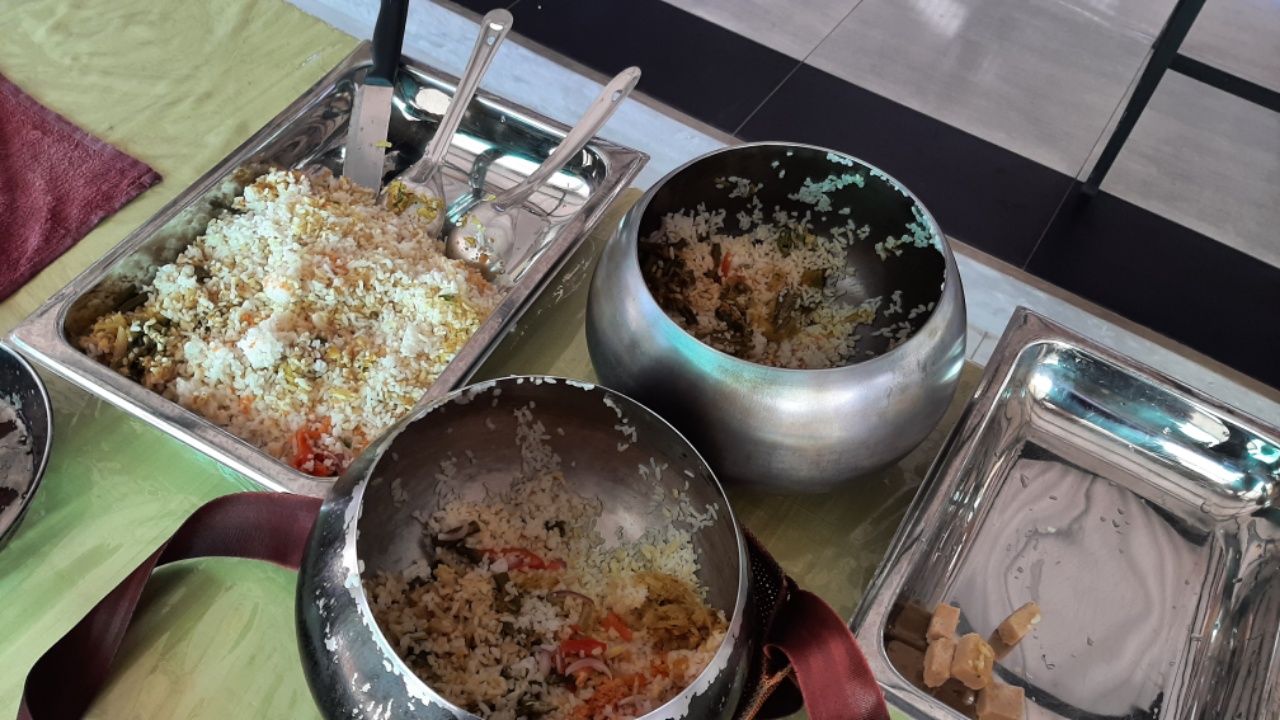 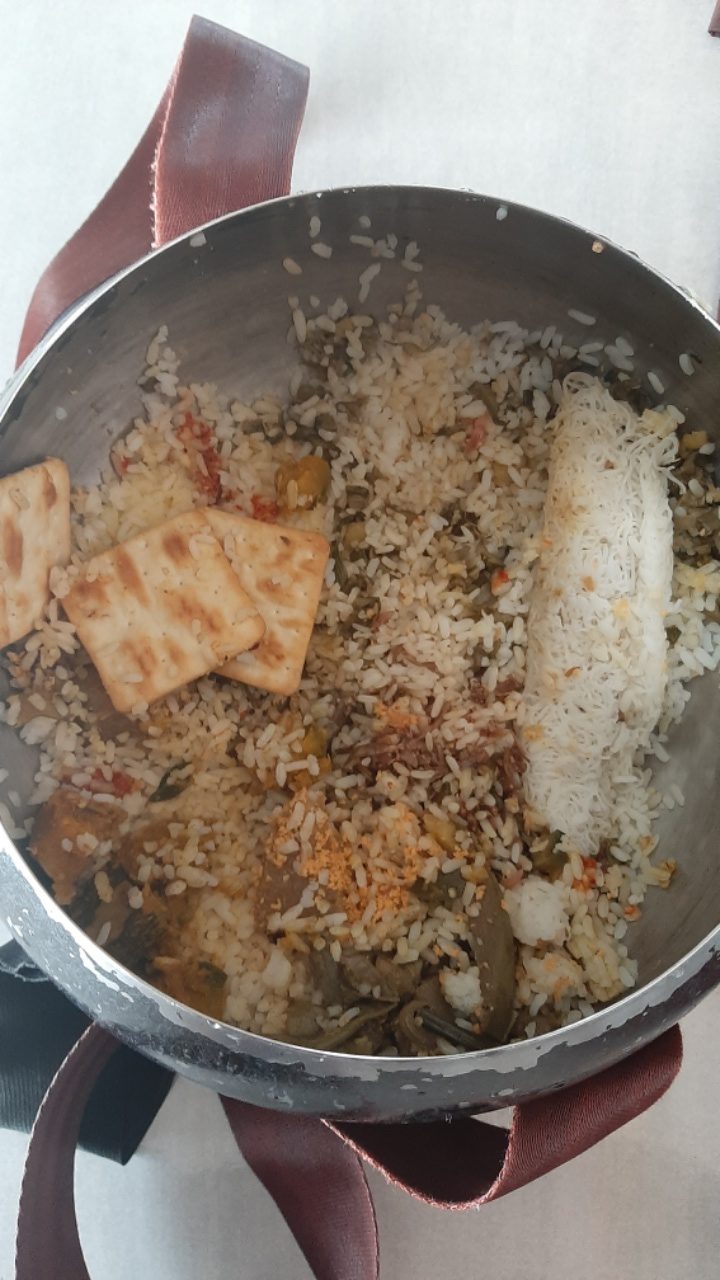 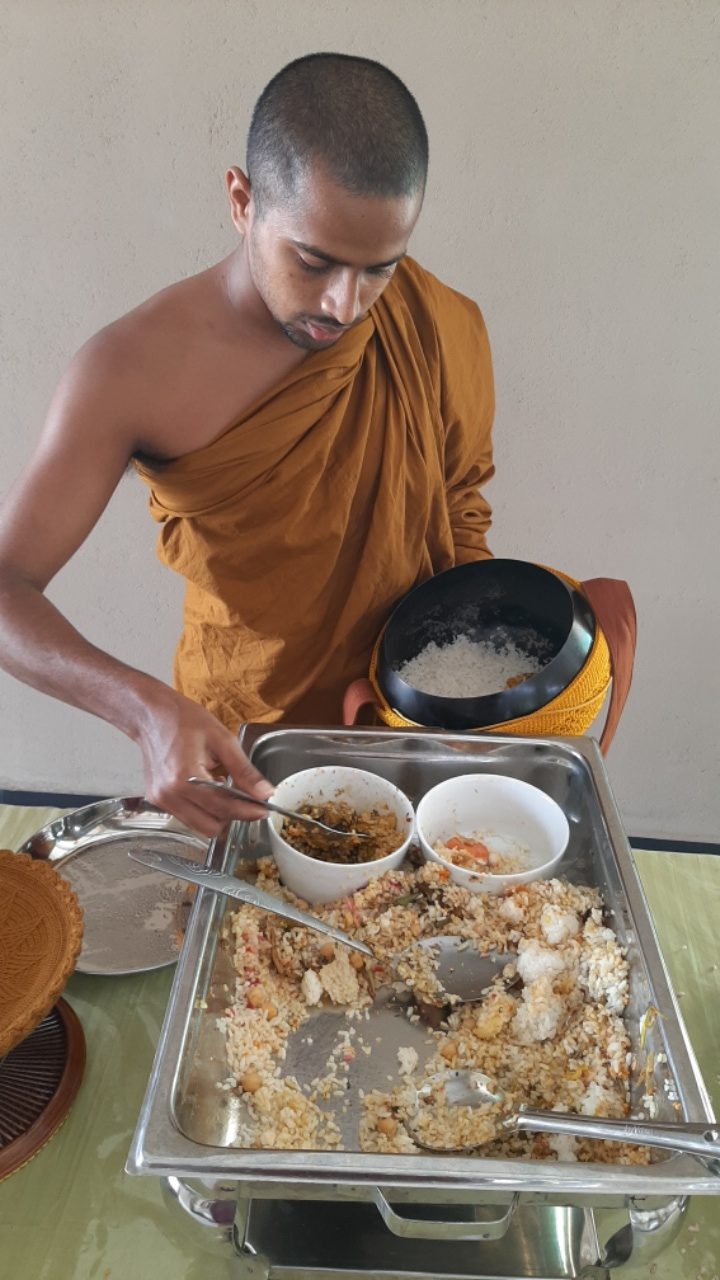 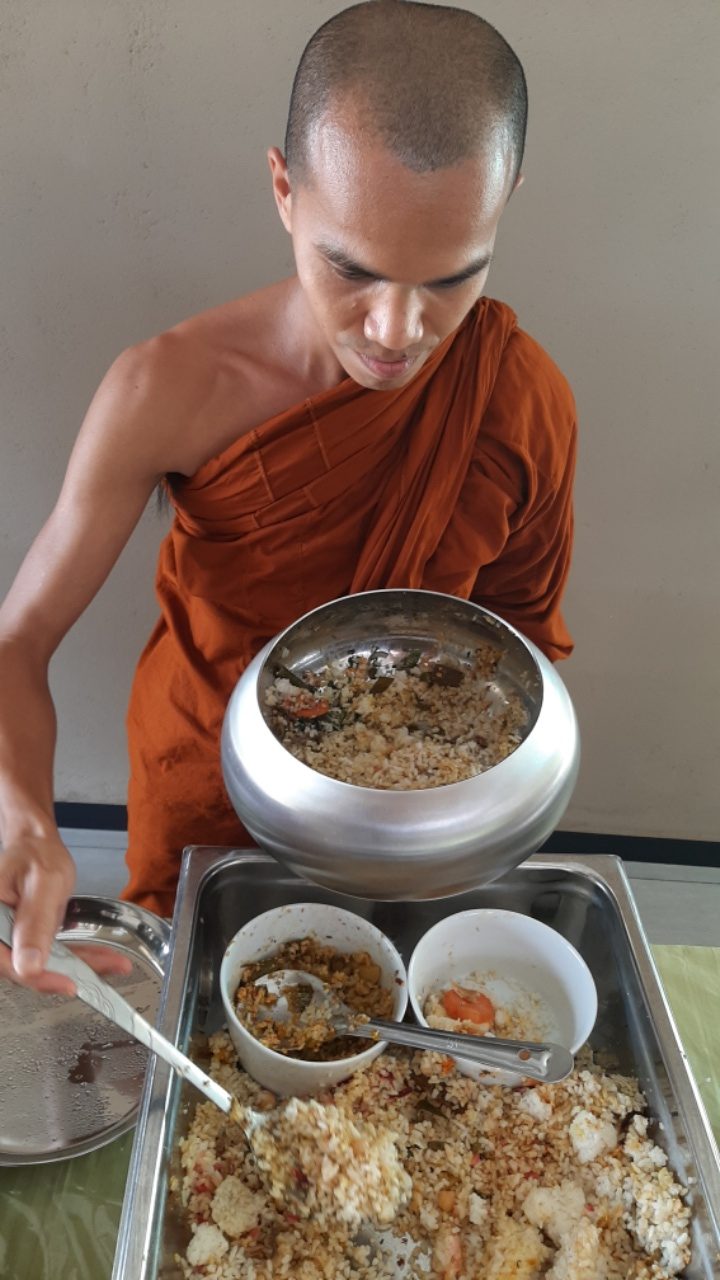 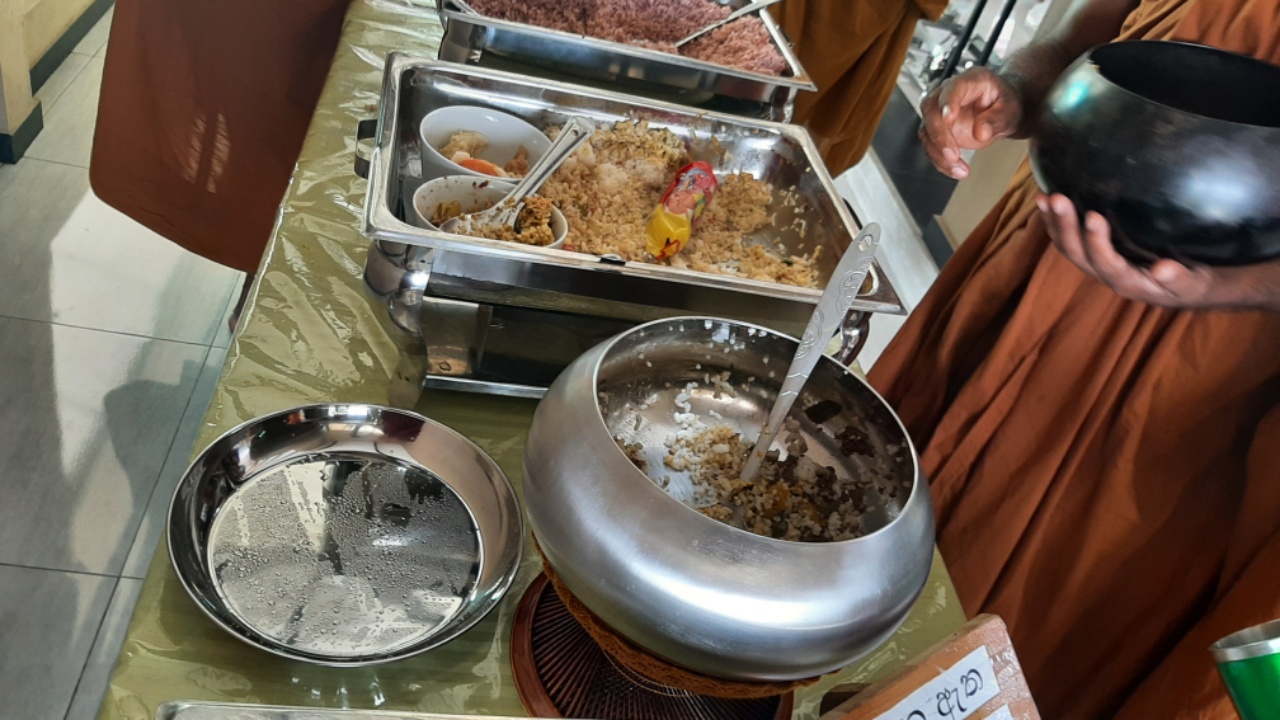 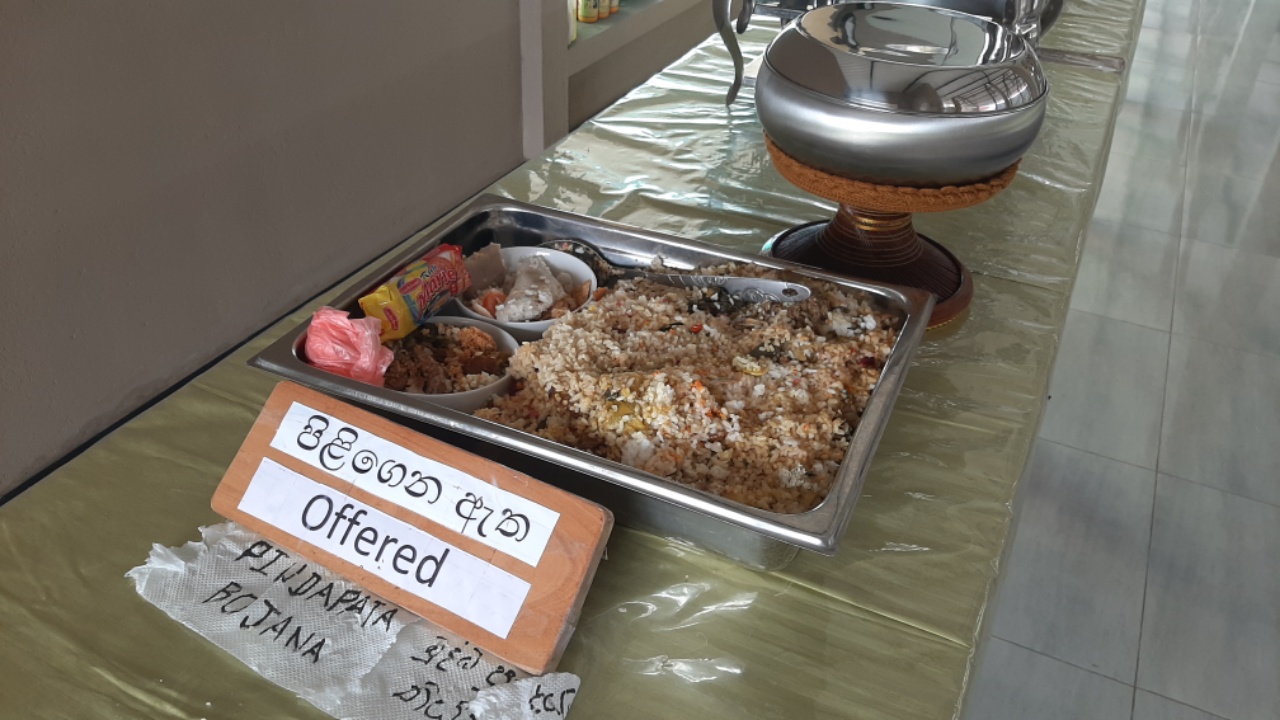 (Pictures of alms food and the monks taking it. The majority of the alms food shared with saṅgha will get used and is preferred by some monks who didn’t have the opportunity to go. Alms map, and another day of alms offering are shown.)

In conclusion, going for alms in a village that is suffering from economic hardship is an important practice for Theravāda Buddhist monks for helping the villagers make merit, sharing in compassion, reflections on kamma and results, and giving between the monks themselves and developing a sense of community.

“With alms bowl in hand,
we roam the village land,

Offering a chance for merit to expand,
villagers sharing food, yes, they do understand.

Merit they make in giving,
compassion we show in living,

Summmary Poem Written by Chat GPT and Edited by me 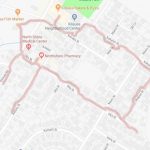 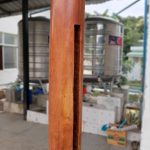 One thought on “About Piṇḍapāta: Why Do Monks Go For Alms in a Village?”