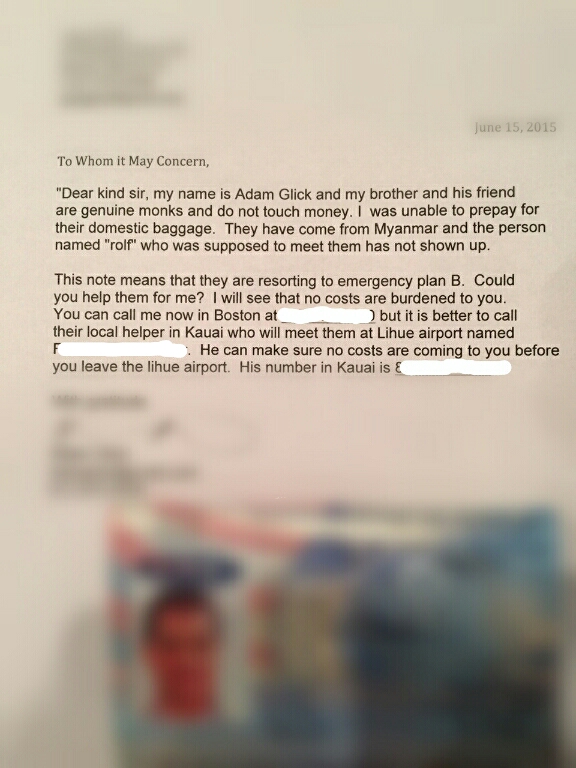 When Ven. Devananda and I traveled to Kauai in 2015, we did not have a Kappiya (helper) to buy us food or even pay for our luggage.  One can live without helpers, but it does take some pre-planning.

We had a ticket from Yangon to Honolulu that was dirt cheap at only $854 for a round trip fare.  However, it came with 12 hour and 6 hour layovers in China.  I think the whole trip was over 40 hours.  All meals would be provided on the plane that were within our eating times.  We did OK with that, but there was a problem when we would transfer to Kauai via a domestic flight.  These days, luggage is not included in the airfare and Hawaiian Airlines did not allow one to prebook luggage and pay for it in advance except during the last 24 hours.  My brother was arranging everything for us and he was on vacation during the same time that we were travelling.  Have you ever heard of Murphy’s Law?

“If something can go wrong, it will and at the worst possible time.”

He was in Paris.  He would set his alarm and try to figure out the time zone differences, but something could possibly go wrong.  We also had a friend of a friend who was going to meet us in Honolulu and give us some food before our next flight so we could eat that day.  We did not know this person and we did not know if he was reliable or not.  He was plan B for our luggage.  So as a plan C, I had my brother make this note that explains the situation at hand and asks for help for us on his behalf.  This note is posted above and you can zoom in on it a read it.  Personal information has been removed.

In the end, my brother did set his alarm correctly according to the right time zone and we had our luggage booked.  The person who was going to pick us up and feed us was on time and ready for us and we did not need plan C.  However, that is what one must do.  Plan D was to relinquish our luggage because there was no way we would travel with money or an  “envelope.”  It is convenient to touch money and that is why monks do so. However, vinaya (monk’s rules)  should be more important than my own life.  What is luggage at that point?

On the way back, that 12 hour layover was exactly during the time when we needed food.  It was from 12:30 am to 12:30 pm.  We stood in front of McDonald’s at the airport.  It was not going well and I switched to Kentucky Fried Chicken.  Eventually we met some.people who were American and who knew about Ajahn Sumedho.  They gave us some crackers, almonds and flavored water and said they might buy us something.  Later, while we were checking in our luggage, they showed up with a pint of fried rice.  We had to share that small amount between the both of us.  I did the dividing and gave ven. Devananda what I perceived as a slightly larger portion.  We ate the rice and for some reason, neither of us felt hungry afterwards.

December 8, 2015 was when that all happened on the return home.

2 thoughts on “Traveling Without a Helper”