It occured to me that people don’t know one type of Buddhist monk from the other and a post was needed to explain this.

First a little bit of history. Theravada is the closest thing as one can get to the original form of Buddhism and is based on the Pali texts. The countries that have Theravada as their national religion are; Myanmar, Thailand, Laos, Sri Lanka, and Cambodia. It dates back to the Buddha from 5th century BCE Later, came Mahayana – Chinese Buddhism of the 1st century BCE. The texts are based on Chinese and Sanskrit. It is most popular in Taiwan, South Korea, Japan and Vietnam. Tibetan Buddhism is from Tibet and also followed nationally in Bhutan. It is from the 7-9th century. Their texts are in Sanskrit and Tibetan.

How do you know what monk is from what tradition?

In Theravada, the monks wear rectangular robes wrapped around their bodies. The robes have a pattern based on the look of rice paddy fields. The colors vary from burgundy-red, yellow, brown, tan, orange. Basically, anything is allowed except white, black, grey, blue and green. The monks usually have the right shoulder exposed when in the Monastery and both shoulders covered when they are outside in the village. If you search for monks, you will often find Theravada monks. Since they are the oldest form of Buddhism, it often brings a natural association with Buddhism.

The Mahayana Monks wear matching grey pants and shirts. Sometimes they have yellow pants and shirts as well. It depends on the country. They also have a ceremonial robe that clips on over their shoulder as well. While the lay people usually only see them during ceremonies, these robes are rarely worn and is usually brown or yellow. The Zen monks usually wear this color or black with various things hanging around their neck.

Tibetan monks usually have a burgundy set of robes with a yellow and red vest underneath. The colors might be mixed with yellow or all reddish/burgundy. They sling the outer robe over the shoulder or sometimes rarely both shoulders. You can see them with the vest and nothing else over it, or with the outer robe covering them.

Conclusion: There are many different types of monks and the style of robes vary from place to place, sect, and tradition. This is a simple and general listing of the three major schools of Buddhism and the different kinds of robes worn. 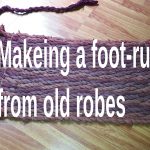 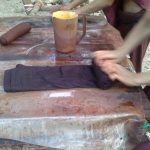 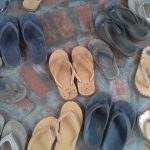 500+ monks at Pa-Auk Main. Some slippers go missing, but not these.

2 thoughts on “The Robes of Theravadan, Mahayanan, Tibetan Monks”