There are certain characteristics of the Theravada Buddhist monk’s bowl that might be interesting to know, even though the information is quite dry. Enjoy!

The Buddha has allowed two different types of materials for bowls: iron and clay. When we say iron in Asia, we mean steel. Stainless steel is called steel. Is stainless steel allowed? This metal was not invented yet, but The Buddha left us with the great standards to judge if something should be allowable that was not mentioned during the time of the Buddha. Because it is strongly resistant to most rust, and still contains iron, it has been unanimously decided that stainless steel is allowed. Today, it is one of the most popular long lasting bowl materials used.

The shape tends to be a wide shape usually similar to the one pictured above. There are no shape requirements that I have heard of, but this shape is useful. It is wide so it can accept many different objects. It can be placed on a circular bowl stand and not wobble. It is round at the bottom so the liquids can collect.

Typically the bowls are sized from 6″ to 9″ bowls with 8″ being the most standard and most popular. New monks in Thailand often have huge 9″ bowls. The size is dictated by the vinaya. Some would argue that the 8″ is the proper size while the 6″ would be way too small and the 9″ too big. We really cannot know for sure what is the proper size and it was heavily researched once by the legendary high scholar1I originally used the wrong word to describe this highly respected monk. It was unintentional. My English skills have dropped over the years and even my editor did not pick up on this. “Greek Bhante” who can answer any question … but this one.

The BMC goes on further to mention that one monk tried to calculate the size of the bowls based on the volume of human skulls (!) using the Meṇḍaka story found in the Dhammapada Commentary. Nevertheless, the author of the BMC as well as Greek Bhante say that the size is still unknown.

Why is it so big? The bowls are indeed quite big. In fact, it is similar in size to a mixing bowl. The reason is twofold:

Here is a quote from directly after the Buddha’s first sermon. Not only can you see that other monks are sharing the food from the alms collected that day, but we can also correctly point out that the sermon was not all that was needed for the monks to fully grasp the teachings. The Buddha remained, while the other two collected food.

To fire a bowl one coats the bowl with a thin layer of specially treated sesame oil and then it is baked for about 5 or 6 minutes. The oil must be cooked ahead of time and made thicker, just like you would do for a soup or stew. It should be cooked down to 1/2 to 1/3 the volume. I didn’t think that oil could be cooked down, but it can. I had trouble doing this in a saucepan, but I later learned that it is best to take a can of soup and empty it with the smallest hole possible. Then fill the can with your sesame oil that needs to be cooked down. Put that can with the small hole into an open fire for a long time. Sometimes 4 to 6 hours.

My current bowl was baked in the West using a standard oven that was outside. It will make a lot of smoke, so doing this inside is next to impossible with modern fire alarm systems. Although my donor told me to cover the fire alarm with plastic wrap, I found an outdoor oven at another house!

After the oil has been cooked down and cooled, you need to wipe it with small layers and then place it in an oven at the highest temperature. After about 5 minutes, you can take some ash and place it on top. Blow it off, and if the bowl is clean without ash, one’s burning is complete. If it is not clean and sticks.. put it back for more cooking. Repeat 5 times.

Cutting The Rim of The Bowl:

Most Thai bowls had a reinforced layer at the top of the bowl. The steel was folded over to make two layers. However, although it is very strong for the bowl, it makes it difficult and nearly impossible to clean properly. To solve this, most monks opt to remove the top part of the bowl. Pa-Auk started to do this during my second year. At first it was shunned by one of my teachers. He said it would make it weak. However, slowly, one by one, monks started to grind off the top rim of their bowls, including that teacher who earlier said it was bad. After that, it was my turn. It is now a standard practice and I have been told that it is now possible to get such bowls without the top rim at a shop.

The bowl bag is standard equipment for a bowl. Normally a bowl will come with a bowl bag, but many opt to have different styles of bowl bags. My bowl bag is a snug fitting crochet “sweater” that has some slots for a bowl strap. I have opted for a seat belt from a junk car because this material is the most comfortable and durable. If it can protect you in a car crash, it can hold your bowl. Plus, one is always wearing his seat-belt! Pa-Auk usually has loose fitting bags so that the bowl lid which is upside down and used as a tray can be fit inside.

The Canon does not mention lids for bowls, although these are now used universally throughout Theravādin countries.

The bowl lids are often made of stainless steel and come in a set with the “bowl kit” when it is purchased. Pa-Auk usually puts a small ring around the outside so it can be flipped upside down to fit snug inside the bowl without sliding. The cover picture (up top) is probably a pa-auk modified bowl. Traditionally in Myanmar, these bowl lids were made from Bamboo. With the rise of popularity of stainless steel bowls, the use of bamboo lids has fallen to nostalgia.

The topmost picture above has a wooden bowl stand, and the picture in the bowl bag section is a metal bowl stand. My personal bowl stand is a hose clamp I found on the road in Kaua’i. I wrapped rope around it so it would not scratch the floor and to give it a new look. I like this because it is shorter yet does the job of protecting the bowl and keeping it from sliding. I can also remove this from my bowl bag easily. Lastly, if I travel, I can put this in the overhead luggage area due to the low profile. Monasteries often have extra bowl stands. I often use one of those when eating in the public alms hall.

The Importance of a Bowl:

Normally monks cannot ask for things from a person who has not invited him to do so. If he does ask for things without an invitation, this is wrong livelihood and the items are not allowable, “like nissaggiya”. However, that is not true if a monk’s bowl is stolen or damaged beyond repair (or needs more than 5 patches). If these conditions are met, the monk is allowed to ask for a bowl, but not other items. As I always say, “No bowl, no eat”, and that is why it is allowed.

The bowl will last a very long time and the forest monks usually eat from their bowls everyday. If you get an opportunity to sponsor the bowl for a monk-to-be, it is of great honor and merit. More than ten years ago, my brother bought me my bowl while he was in Thailand which has a great reputation for monk bowls. I don’t know if he understood what a big deal it was to donate a bowl, but he did make a great effort to get a proper 8″ bowl instead of the standard Thailand-nine. I still use that bowl today and have not accepted other bowls in its place!

There is a lot to know about monk bowls. I have covered the main points to give you the basic information. It is not recommended to use a monk’s bowl without being ordained. However, when I was a lay person in the 90’s, especially when I was first starting out on my own, I used a single square-shaped CorningWare dish. I cooked in it and I also ate with it. If you can, go a few days, a week, months or years with such a bowl, or mixing bowl. Only then will you understand for yourself more about the simplicity of the monk’s life. 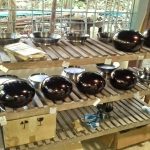 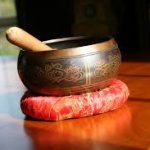 Singing With My Bowl

Why Are Most Monasteries Not Allowable?