Sunday night we had an English Dhamma-talk with Sayadaw U Kovida. The new FM Transmitters were used for simultaneous Vietnamese (102 MHz) and Chinese (101MHz) translations. We also used one transmitter for our weekly "monks' rules" class for the Vietnamese group. I'm a happy camper! The idea was to have the translators speak quieter so the rest of the group can hear the original English speaker. There is still the noise of two or three translators speaking during the English, but they speak in a normal voice instead of speaking to a crowd of people. The Vietnamese translator likes it too. He says it removes much of the stress. sadhu! ﻿ 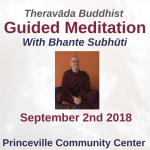