While I have said quite a lot to inspire people about life as a monk around the world. I should give you both sides of the story to be fair.

When you think about living in Asia full-time or just for a visit, the first thought that comes to mind is, “Will I get sick?”. It can happen, and when you rely on volunteers and health standards that work “most of the time” but not all of the time, then problems can arise. And if you are a monk who goes house to house, you are at the mercy of every kitchen’s health standard in every single house.

When I was going for alms in Hawai’i, I often told people they could use their hands to put food in my bowl and they were shocked by such a laissez-faire sanitary attitude. Hawai’i was a piece of cake compared to what I’m used to. I’ve once pulled out a 4 foot long strand of hair from my mouth while eating and then continued eating the same food afterwards. I have also had countless stomach problems that come and go within a few days. I have also had food poisoning 2 or 3 times (maybe more). This last one really got me though.

Sometimes food problems happen throughout the monastery all at once. We are not sure what this one was, but several say it was food poisoning. I got sick on Monday night on June 8th and while I’m better 10 days later, I’m still healing. I’m up and about and able to type this or walk up the mountain. The good news is that since coming back from the USA, I have been actively trying to slim down to 70 Kg from a whopping 80 Kg! Before the sickness I was back down to my normal slightly chubby 73 Kg and now I’m maybe 71 Kg.

About 10 days ago, my stomach was gurgling at night and I didn’t sleep well. I wanted to vomit, and did the routine with dry vomiting action over the toilet but nothing came out. I was not forcing it, tears were rolling down my eyes from the vomit action in my throat and let us say it was not fun. However, I wish I could have vomited that night because something needed to “get out.” The next day, I had a fever of 101F and I was sleeping for 21 hours per day for the next 2 and a half days.

I sent a message to the clinic doctor monk, but he was sick too and could not help. So I went to the interview teacher to find another doctor monk who is usually there taking attendance. He was busy but called a third doctor monk for me and then I got help. (Yes, three of our monks are real MD’s and a fourth just recently disrobed after 11 years). The doctor gave me anti vomit medicines and not much else. He didn’t give me Paracetamol (synthetic aspirin) because the electronic thermometer (which is used to screen for Covid-19) was saying I was normal. However, I have an old fashioned mercury thermometer and I know I had a temperature because it said so and later read normal when the temperature passed. I’m pretty sure these temperature infrared guns just flash random numbers near “normal”.

When a monk is sick, it is easy to get food delivered to his kuti. After this broke out, all sick monks needed to stay clear of the dining hall. A few days later, I was hungry and ate all of the breakfast food plus some of the lunch that was brought to my kuti. I ate like famished monk and I regretted that because my stomach was not ready for full action yet. I went through another few days of sickness with no fever and then I was okay… well… sort of. As I said before, there is still some type of queasy feeling in my stomach at times. I have only had a full meal three times (including the famished monk feast and today).

Most monks are “sort of recovered” as well. We are all in the same boat and today was better. When I was barely eating, I noticed that the eating hall was cleared out by the time I had finished washing my bowl. That was because people were eating less and it was taking less time for them to do the same. Our chief Admin monk just came back to the eating hall today.

Unfortunately, they have not researched this totally. I’m pretty sure it was a particular food from breakfast from my investigation but there is no real way to know for sure. I take small breakfast but I only take the extra stuff that gets put on the extra donation tray or from friends to avoid the line. I suspect it was the greasy bean filled pancake if you can call it that. Other monks blamed the water system and the monk in charge of the water felt really bad. Our system makes industrial grade reverse osmosis water just like any water bottling plant so it should be fine. The water monk said he is now adding chlorine to the system as well which I think is overkill. On top of that, we are told to boil the water for now on.

While I laugh at all of these unnecessary precautions, I have been boiling my chlorinated reverse osmosis water. Why? Things are just not right for me now and I’m doing what I can and I sort of like the warm water in my belly.

It is quite scary to get sick while traveling, and even worse to get sick as a bhikkhu. As a traveler, I had money and could be back home in a flash if I wanted. As a bhikkhu, I don’t have this option, and I’m left at the mercy of the doctors who volunteer at the clinic twice a week. It is even scarier when they give you medicine and it helps, but then the sickness comes back with a vengeance! I don’t think I have ever been so drained of energy. (Almost the whole monastery got this bug.) Read more at link below: https://americanmonk.org/book-going-for-broke/ 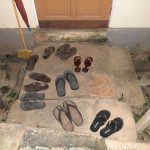