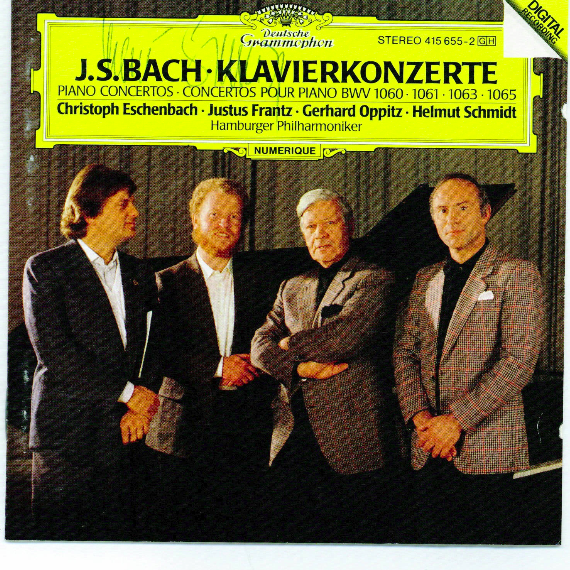 A Story from 1993 from my college days, before the Internet was around.

I remember all the way back in ’93, when I was in college and I had just spent a few weeks in China for an academic scholarship. Because I was now some type of “International” student, I was asked to attend a “lunch hour” question and answer session with Helmut Schmitt. Although I had international travel experience, I was hardly experienced in “international issues,” and I did not even know who or what he was. What was a Chancellor anyway? I guess it was some type of president or something or another. In any case, I was told to think of some questions, because it was important for the students to have many questions for him so we could appear educated and not waste his time.
In the mean time, or maybe even earlier, I was at a meditation friend’s house. When I entered his place, he had some music playing in the background. I was taken aback by its sincere beauty and asked my friend what was playing. He showed me the cassette tape cover and explained that it was a get-together between professional and amateur pianists. One of those pianists was even a politician. They got together and played Bach on piano during Bach’s birthday, and the recording was the result. I admired the energy of this tape and asked if I could borrow it and he said yes.

Later on, I was enjoying the music in my car cassette player when all of a sudden the wonderful music started to slur, and gargle while smoke and excess tape started to come out of the player’s mouth. I quickly ejected the tape and salvaged it, but a short segment was destroyed. Being the responsible and nice person I was, I decided to replace the tape cassette recording with a CD. CD’s were new back then and much more expensive than tapes (even thought they were cheaper to produce). A copy of the CD was not easy to find, and I needed to special order it from a music store that niche market for this kind of stuff. I ordered two CDs. One for him and one for me. I remember it was the first time I had ever bought a classical music album.

Later on, I went to my parent’s house for my regular monthly Sunday night dinner. During that time, I told my parents about the two new things that were up and coming in my life. One was the invitation to ask some German guy some questions and the other (more interesting thing) was the story behind the new CD I ordered. My father appreciated both, and a few moments later, he brought the CD cover over to me and pointed to a name listed as one of the performers. He pointed to Helmut Schmidt’s name and asked me if that was the same guy I was going to see. I said, “Hmm.. that must be the guy.” because I knew one of them was “some political person…” and then I started laughing with joy because my task to come up with a question had been solved. I had a great question to ask Helmut Schmidt and I would sound like some expert who knew the smallest details about his life, when in actuality, I knew nothing else about him. I was the one who knew about this special CD performance! (Note: In 1993, there was no Internet to research famous people. Something like this was a rare type of knowledge).

A week or two later, the question and answer thing started. The room was packed with 150 or so students and in the centre of the room was chair and an ashtray. Although smoking was recently outlawed at our University, he was allowed to smoke inside. He sat back in his chair and the hands shot up to ask the questions. Question after question, he would puff on his cigarette, exhale some smoke, and then proceed to answer. They would ask him many questions I did not feel he was responsible for. I remember one question was about what he was going to do to solve the Neo-Nazi movement. He explained about how Germany was forced to have very liberal immigration and asylum laws after WWII and that they also had very generous programs to help the newcomers settle into their new German residence. He said that the money and benefits were a little too generous and the local people who were struggling themselves were getting jealous. He concluded and said that this was the hatred where the Neo-Nazi movement came in.

As the questions kept rolling on, I could sense there was some sort of annoyance with the questions he was being asked. He seemed a little arrogant with all of the young people asking all of these questions, but he was probably there for some more important reason. Maybe he lost a bet, or there were free cigarettes in the deal for him? We were not a really well known University, so I am sure he was influenced by something far more important. Within a short while, it was time for the last question. My hand went up, but so did an additional 150 other hands. Another question, exhale of smoke and answer cycle happened and then it was over. He stood up and then the students followed. A jammed cattle herd seemed to form around the exit and because he was in the middle of the room, he was stuck in the middle of the heard while I was near the back. It was really crowded and he was roughly 10 feet away when I started to call out, “Mr. Schmidt, Mr. Schmidt!” He stopped and then turned around to acknowledged me. I reached into my coat pocket and pulled out a CD. In retrospect, I am really glad there were no trigger-happy Secret Service agents in the room. I held the CD and said, “Can you please sign this for me?” He looked at the familiar but rare CD jacket, smiled, and then said, “Where did you get this?” and then he pulled out a pen and signed his name. He walked away with a smile on his face, and I was happy too.
He came to a college and was answering all of these heavy political-science questions and then came this voice to asked him to simply sign a familiar CD cover. It was a CD that had loving energy towards John Sebastian Bach on his birthday. It was a CD which gave him a momentary break from the heavy tasks of the political world. Again, after all of the heavy political business was finished, the CD pulled him out of that heavy world for another few moments. I clearly knew at that moment that I had made his day.

Go ahead, and make someone’s day!

Shine Loving-kindness when people are having a rough day.

My father sent me a picture of the CD which is now his.  If you look closely, you will see that someone signed the CD.

Helmut Schmidt has passed away in the past few years, and I am happy to share this story with you.

The CD is easy to find today with the help of the Internet and Google.  The link to the CD can be found at Amazon here:  J-S-Bach-Konzerte-Fur-Klaviere It is by the way, very well rated.

I was very grateful for the scholarship which enabled me to travel to China for virtually nothing.  As a layman, during my professional years, I made it a point to give $500 per year into to the foundation that sponsored me as a student.

Here is a link to a Wikipedia article on Helmut Schmidt