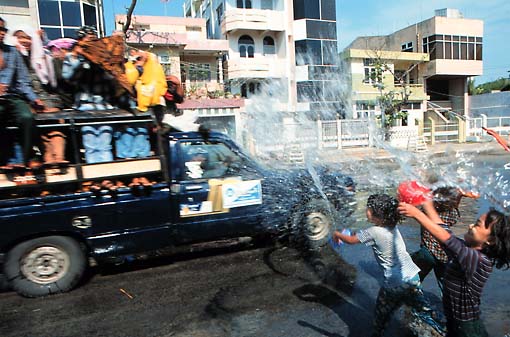 In the eight plus years that I have lived in Myanmar, I have never seen the Thingyan Water Festival festivities happening in the street. I normally spend my time in the monastery and normally, if I went on alms, it would be early in the morning. However, our Kyownpine monastery goes out on alms round a little later so we can collect real food to actually eat a little bit easier (so the donors have time to cook). Because of this, I was able to see the “License to Spill” in action for first time.

I was able to witness a spectacular continuous water throwing extravaganza taking place almost anywhere and everywhere. We would walk through the village and almost every road had children waiting to soak their victims. They would station themselves maybe every 100 meters or so. The main roads were no exception and perhaps more popular, due to more frequent passings of cars, trucks, and of course motor bikes. They would have barrels filled with water so they could quickly reload their water buckets. Water guns exist, but buckets are the most effective.

The children seem to show no mercy to anyone, except of course for the monks and our assistants.. well almost. As we were driving to the village for alms, some of our helpers sitting in the back of the truck were getting splashed on the way. Often, there are crowds of people riding in the backs of trucks inviting themselves to be open victims for repeated drenchings. Our truck, which has 8 or so volunteers riding in the back did not look so different from afar. Invited or not, nobody seems to have a license for “dry-ve by.”

Despite all of this, nobody seems to really get angry, even if they are on their way to an important meeting, work or school. In addition to many families growing up in a single room house, Thingyan may be a part of the culture that may help make the Myanmar people some of the most social tolerant people in the world.

Thingyan is also a time for people to go to the monastery and practice. It is ordination season now and many people take temporary ordination during this time. Our monk and Yogi population seems to have doubled during the past few days. These temporary monks call themselves “Dollabhat Bhikkhus,” but really it is the Myanmar pronunciation of the Pāi word Dullabho.

We have a chant at Nauyana, Sri Lanka, which explains why temporary monks are are part of a tradition.

Ironically, this practice does not take place in Sri Lanka where we chant these Pali phrases. One of my friends, once ordained for 45 days. He got Samādhī and stayed as a monk for 13 years. He eventually disrobed, but 13 years is no small accomplishment. During his monk life, he went to Vietnam to teach and might be responsible for the getting the ball rolling for the 200 plus Vietnam Yogis and monks who live at Pa-Auk today. Another two friends of mine were once professional doctors and they are on their 4th or 5th years. One is scheduled to become a teacher soon. They too, took temporary ordinations. The “Dullabho” ordinations are real and authentic and one can stay if one wishes. This is because of the Buddha’s Words stated above.

You can get formatted html posts sent directly to your email inbox.  Feed Burner is run by Google and makes it safe and easy to subscribe.  Simply enter your email address and hit the Subscribe button. After you verify that you are you, you will be notified by email for all new posts.

copyright “Goto Osami” and link to my website “http://www.ayeyarwady.com/index-e.htm”.