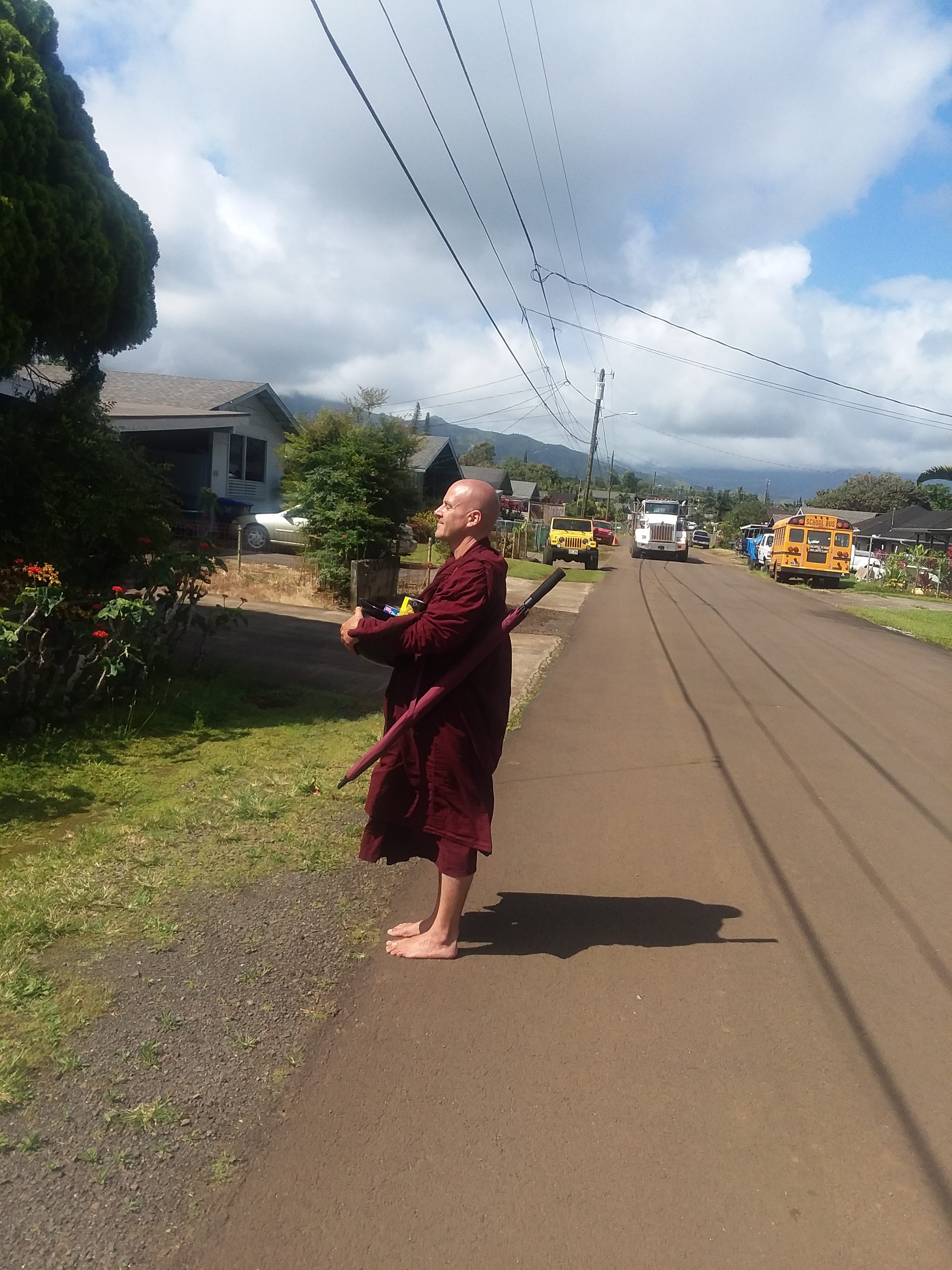 Collecting alms, also known as piṇḍapāta by Theravāda Buddhists, is a legal activity in the USA. There are some restrictions though. I spoke with a lawyer who seemed to know civil liberties quite well, but there are no guarantees with what I say. However, this information should make sense and seem legal to you. It is legal to ring the doorbell of any house and preach to them or talk to them about politics under the freedom of speech rights. One can even ask them to support, give money to a cause. One can sell them vacuum cleaners too. However, if they have a sign that says, “No Solicitation” or “No Trespassing” or “Private Property”, or any other derivative, then one need to stay clear away from the property lines or at least up to the sign location.

There is only one problem. While the laws more or less give me full access, my Buddhist rules do not allow me to say anything unless I am asked first. It would be a little freaky to have a monk just standing on your front doorstep and not knocking on the door. In that case, my liberal and Buddhist lawyer friend told me,

“In that case, better to just stay on the road at the edge of the property.”

So that is what I do most of the time. I stand on the side of the road and wait for the residents of the houses to approach me. Then when they ask me what I am doing, I can tell them. In Thailand, or Myanmar (Burma), we just walk and the lay people know what we are doing and call us over, or they are waiting before we walk by their house. That is nice. In Sri Lanka, we go quite far inside the property and wait about 8 feet from the door. Just about every house in Sri Lanka will give something if they have it. I have even received from a Muslim person in Sri Lanka, and yes I ate his food with gratitude and without fear.

In Kauai, Hawai’i, most of the people in the neighborhood tolerate what I am doing. However, most of them think I am only blessing the houses. In fact, I often hear the words, “Thank you for the blessings.” While I am waiting for people to come out of their houses and ask me what I am doing, I practice loving-kindness in front of each house. This was the practice of the Mahathera Subhūti during the time of the Buddha. I was named after him, and that has been my inspiration for going for alms. So, they like what I am doing, and it takes patience for them to figure it out, and I think they appreciate the passivity. It pays off eventually. Recently, I had four different donors in one day’s route.

I normally do not get enough food through the house method, but one way to get food in the West was invented by a monk at Amaravatti. He stood outside of a supermarket and got food one day and then it became a practice for that monastery and others. While this is legal to do on public owned roads or sidewalks, most shopping centers are privately owned and so are the parking lot and surrounding areas where you might want to stand. In this case, one needs to get permission from the store managers or the shopping center property managers. I have permission to stand in front of the Big Save market in Hanalei by both the property managers and the manager of the Big Save.

I do quite well in front of supermarkets. It is the preferred method for getting food, but even so, there is nothing like going for alms on the streets, especially if you practice loving-kindness meditation while waiting in front of each house. The property managers like the idea that I am very passive and wait for people to approach me. They like the idea that I have not used money in 17 years and support it too.

However, not all shopping centers are equal.  Princeville shopping center does not allow any solicitation even though a supermarket manager gave me permission during his shifts.  The manager came out one day and sadly told us the property center’s policy,  “Not even the Boy Scouts can stand on our property.”   So Hanalei is the only shopping center that I go to (so far). I feel grateful for such an opportunity. I feel like it is my duty to go there and collect food in that way.

So it is legal to stay on the edge of the road and wait for a few minutes. However, you cannot block traffic and you cannot loiter. That is why those who are on strike walk in circles. As long as they are walking, they are not loitering, even in front of a company they are protesting. What more can be said about a silent monk who stands only for a minute or two? I have also done research on this issue recently, and it seems that actively begging for food or even money has been challenged and is now considered a first amendment right by some courts. 1 2 3

Every so often, I see a police cruiser driving down the neighborhood where I had just come from. Odds are that someone called the police on me, because you don’t normally see police cruisers on this island!  When I see a cruiser, I give a friendly smile to him and they all usually wave back with a smile. I’m not afraid of the police and I think they like the idea of a monk walking through the neighborhood, wishing loving-kindness. As I walk, I wish for the neighborhood to be protected and they pick up the slack where things go wrong. We are all on the same team!