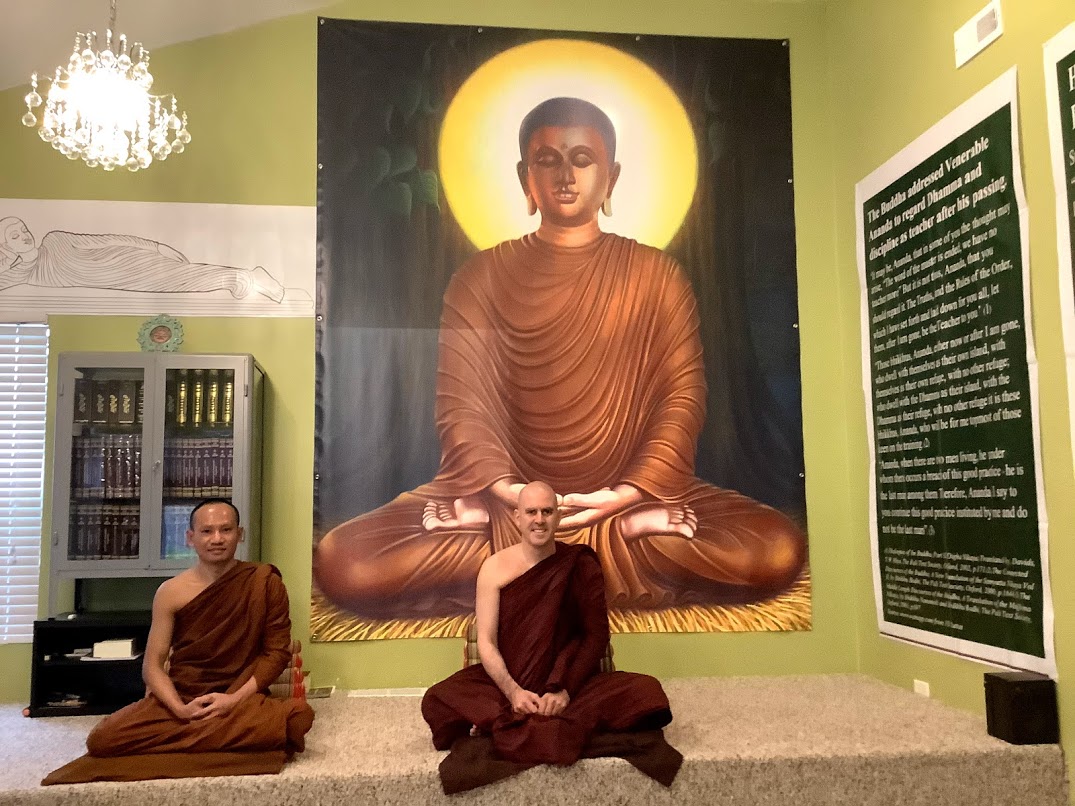 Recently, I had a chance to go to a Lao Monastery in Elgin, Chicago, IL, USA for 12 days. I usually avoid American Theravada Temples like the plague because most of these places have monks who use money and much of the monk life is centered around collecting money. This is a typical standard not only in America but in most countries. This monastery however, is different.

In 2015, the committee decided to stop being a useless, unwholesome temple that teaches wrong dhammavinaya (teaching and training — on wrong ways to give donation and wrong ways to make merit, and obviously wrong kamma and results). If that is not bad enough, they used to sell alcohol for fundraisers too (!). Unfortunately, I know of three other Lao monasteries in America that sell alcohol. The committee knew this path was in the opposite direction of The Buddhist Path and decided to change. They offered the resident monks to join them with a two year transition period and although the monks agreed such changes were wholesome, when it came down to the wire, they never changed and drove themselves across town in their own cars to another local Lao temple in 2017.

In 2017, a new monk was brought in from Laos to lead them in the proper Dhamma and he also believes that monks should not use money nor charge for the teachings. Because the previous monks were forced out by the committee, this place is truly owned by the committee and allowable for monks to be there despite the corrupted history of monks using money. That was why I was visiting.

The temple preaches based a Buddhavacana theme. Buddhavacana is a very small Thai community that believes that only the words of the Buddha are necessary for progress on the Path. They reject the ancient commentaries and can be quite stubborn about it similar to Trump supporters and their opposites in America. The monastics also reject many of the details about how to follow the rules, in turn, relying on their own opinions instead of the ancient commentaries. This Buddhavacana philosophy is very common among Westerners and as monks in Asia become more “modern” they will also start to think that way too. Is that a good thing? We will discuss that later.

I was asked to give Dhamma talks everyday while I was there. I opted to listen in on the first day so I could get a feel for how they would like me to teach. After that, I gave 8 Dhamma talks. Because the vibe is to let the Buddha do the talking, it was not so difficult to do daily 1 hour talks, but it did eat up a lot of time nonetheless. The people there seemed quite happy with my talks even though I snuck in some background information into my talks (by the ancient commentaries). I was invited back, but we will see. Chicago is very cold and there was a reason why I chose Hawai’i.

Chicago was cold for me and it was only October! Last winter, people were tossing boiled water in the air and it would instantly freeze before it hit the ground. Luckily they heat the place to 75 degrees. Coming from Hawai’i, I stayed inside most days.

There is also one problem with this place. They follow a monk named Ajahn Kukrit who was removed from the Ajahn Chah tradition by its leaders (a tradition which also supports Buddha’s words). The problem is this monk and his followers went a little bit too far and insist that the monks’ (patimokkha) rules are only 150 in number instead of the usual 227. Although this group follows all of the 227 rules and even the thousands of small rules not included in that grouped number, when it comes to a special ceremony held on the new and full moon days where the rules are chanted officially, they opted to change it to 150 feeling they were the righteous ones. This is a potential cause for a split in sangha and it is very dangerous and serious thing to do. It causes disharmony and they are already excluded from their own Ajahn Chah tradition. It is okay to want to focus on just a part of the Buddhist Texts, but it is a big deal (much bigger than you think) to change the official bimonthly rule chanting meetings. And if they change the way ordinations are done, and that is likely to have already happened, there will be a rejection of those who are ordained from Ajahn Kukrit and his followers. As one who has ordained twice, I feel sorry for such monks who might have doubt later on.

All that said, the monastery in Chicago has never had such a 150 rule meeting because four monks are needed to hold such a meeting and they have trouble attracting monks. It is difficult to find monks who don’t handle money, and then when you take a very small portion of those monks who follow this Ajahn Kukrit and his 150 rule ideal, and alienate the rest of the sincere monks, you have very little to choose from. Because the meeting never took place in Chicago, and the resident monk swears he follows The Buddha and not Ajahn Kukrit, I accepted the offer to come for a visit. Not only am I invited back, but I am invited to bring one or two of my monastic friends. Doing so can easily influence the way things are done there 🙂

Although it is clear that my philosophy may not the best fit for such a Buddhavacana place, I respect the rules and speak English too. The reason they really want me to come there (with my friends) is that they are realizing that the younger generations simply don’t speak the language anymore and they have lost interest in Buddhism. Lao culture for the temple used to be a larger theme than Buddhism itself, and now they are thinking of changing the monastery name to remove “Lao” from the title and replacing it with a generic Buddhist name. Most of the current devotees are very old, and if they don’t attract younger people, the monastery is likely to fold in ten or twenty years. The philosophy change to simply follow the Buddha’s Path along with getting monks who respect the Buddha’s rules was one step in the right direction. However, fluency in English and American culture is important and it was a joy speaking with some of the younger visitors who came knowing I would be there.

Losing the younger generations is a little ironic because I remember talking with my sister about how the Jewish religion had zero spirituality when I was growing up. They have lost many Jewish people to Buddhism and It could be ironic that the younger Lao generations move towards Western religions that offer more spirited programs. Currently, as one monk in Honolulu said, “most temples are just money, food and chanting.” Perhaps that is the plague of all established religions and why it is not just Buddhism that is losing its numbers. My hat is off to this monastery, for exchanging the Lao hat they were wearing for a Buddhist hat. I just hope they keep the bimonthly meetings clean if and when they get enough monks to have one. I also hope they can focus on their message without criticizing the commentaries.

The 8 acre monastery is nice and I was amazed at how well it was supported. They have also gone through all of the zoning channels to be fully legal as a zoned residential and public church building. This is not easy to do. Ironically, while this place has only one monk, the temple across town has 5 monks living there and more than 10 times the supporters. Elgin is a hub for Lao immigrants and sadly, the lay devotees prefer places that sell alcohol and allow monks to collect as much money as they can. You are welcome to visit this place and I helped them get online at https://buddhistmonasterychicago.org/ . The website is just a bunch of page markers, but it does have location and contact information. Those who are male can stay for free retreats, but be warned, you need to wake up at 3:45 am everyday!